Skip to Main Content
It looks like you're using Internet Explorer 11 or older. This website works best with modern browsers such as the latest versions of Chrome, Firefox, Safari, and Edge. If you continue with this browser, you may see unexpected results.

Infographic: What to know about DACA

Infographic: Who are the DACA recipients?

Our Dreams Unite Us Graphic 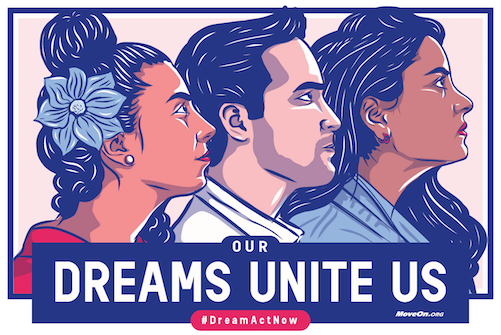 NEW - "Immigrant and Refugee Children: a Guide for Educators and School Support Staff" -  This guide was created for educators, school support staff and service providers who teach, mentor and help open the doors of opportunity for undocumented youth and unaccompanied and refugee children currently living in the United States. Educators, school support staff and service providers are often the first individuals a student and/or family comes out to as undocumented. Teaching Tolerance, Issue 55, Spring 2017.
"We are all Dreamers" -  Stories and portraits of young Americans who are recipients of Deferred Action for Childhood Arrivals (DACA), a program that temporarily shields them from deportation and allows them to study and work legally. The Trump administration announced that they would end DACA and these immigrants fear exile from the only country they’ve ever called home. These are their Dreamer Stories.
"Documented: a Film by an Undocumented American"
Curriculum for the 2013 film written, directed and produced by Jose Antonio Vargas, Pulitzer Prize-winning journalist and the founder of Define American (defineamerican.com), a media and culture campaign using the power of story to transcend politics and shift conversation around immigration, immigrants, identity, and citizenship in America. Click here to purchase DVD or stream the film.
Deferred Action for Childhood Arrivals: A Guide for Educators and School Support Staff - American Federation of Teachers

This guide was created for educators and service providers who teach, mentor and help our American undocumented youth (DREAMers). Educators, school support staff and service  providers  are  often  the  first  individuals  a  student  comes out to as an undocumented immigrant, a trend that will likely continue under the federal government program Deferred Action for Childhood Arrivals  (DACA). It’s critically  important  that  educators  and  service  providers know  about  the  tools  and  resources  available  to  help  guide undocumented youth to become “DACAmented.”

The presidential election jolted campuses with speculation and concern about undocumented community members and other issues impacting international populations. The roughly 750,000 young people who have been approved for the Obama administration’s Deferred Action for Childhood Arrivals (DACA) program have been the subject of particular attention. More broadly, there have been some calls to create “sanctuary campuses.” Statements and petitions have been circulated by college and university presidents, student groups and policymakers.

This ACE Issue Brief can help frame the discussion about these questions. It addresses concerns such as the data DACA applicants submitted in their applications; sanctuary campuses; institutional pledges of non-cooperation; and complying with requests by federal officials for records identifying undocumented students or other community members, among others.​​​​​

Center for Immigration Studies
The Center for Immigration Studies is an independent, non-partisan, non-profit, research organization, providing immigration policymakers, the academic community, news media, and concerned citizens with reliable information about the social, economic, environmental, security, and fiscal consequences of legal and illegal immigration into the United States.
Migration Policy Institute
The Migration Policy Institute is an independent, nonpartisan, nonprofit think tank in Washington, DC dedicated to analysis of the movement of people worldwide. MPI provides analysis, development, and evaluation of migration and refugee policies at local, national, and international levels. It aims to meet the demand for pragmatic and thoughtful responses to the challenges and opportunities that large-scale migration, whether voluntary or forced, presents to communities and institutions in an increasingly integrated world.
Urban Institute: Immigrants and Immigration
The Urban Institute’s research on immigrants and immigration spans three interconnected domains: the role immigrants play in the economy, the challenges immigrants face in different communities, and immigrants’ access to the social safety net. We explore the range of policies that affect and are affected by immigrants and immigration and provide reliable information and analysis for policymakers, advocates, and on-the-ground practitioners.